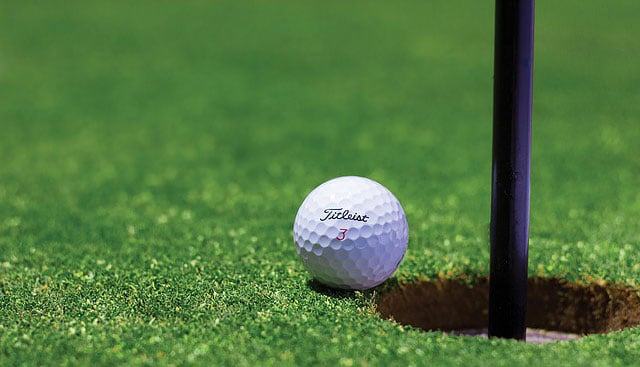 The word Pin may not be found in the rulebook by USGA, but it’s a popular term otherwise known as the flagpole in Golf. The flagpole plays an important role in a game of golf and it’s just as important that you understand the meaning of the term “Pin High”.

Pin High is a phrase you may have heard on the golf course. However if you’re just beginning your journey in golf, you may be unsure what it exactly means. Don’t worry, I will explain to you the meaning of the phrase, as well as share some interesting facts about the flagstick in golf.

What Does Pin High Mean?

The term pin high means a golfer has hit a golf ball that travels the correct distance, but lands in the wrong direction.

If you hit the ball at the exact distance required to reach a flagstick, but you misjudging the direction by a few feet, nearby golfers may call out “pin high”.  The ball could stop a few feet to the right or left of the flagstick which is of course very frustrating.

Pin High can happen to anyone. It can happen due to strong winds blowing at the wrong moment or an amateur player trying his hand at the sport.

What is a Pin in Golf?

Now that you know what the term Pin High refers to, you may be wondering what the word Pin means. A golf course will consist of either 9 or 18 holes. A pin is a flagstick that is used to mark the location of each hole on the course.

The flag sticks can be removed from the ground as your ball approaches the hole. Keep in mind that in the official rulebook, you may not find the term Pin written anywhere. Instead, the official term is referred to as the flagstick.

Flagsticks are color-coded in some instances to help with easier identification of its location.

Should You Keep the Flagstick In or Out?

Recently the official rules have seen a change in flag stick rules. Golfers now have the option of taking a shot with the pin staying inside the hole the whole time.

A golfer can choose to either remove the flag or play with it being in place. As this is a new rule, the question has arrived as to how this rule will impact the game. Are players able to putt more balls into the hole due to the ball hitting the pin first and falling inside the hole? Others feel like rule places golfers at a disadvantage.

For this analysis, only the tournaments being held this year will provide a solid answer. Preliminary studies do show that leaving the Pin inside the hole is more effective, and will help improve your putting.

I have tested the theory myself and do have an answer for you. Although it took a few months to get use to, I now always leave the pin inside the hole. I feel like it has caused me to sink a few extra putts than normal!

In golf, the rules and regulations are usually very precise. The game is known for its precise measurements. However, it may be interesting to note that there is no official size requirements concerning the flagstick.

Some courses also use flags of around 12 feet in height. These vary depending on the terrain the game is being played on.

For detailed information on the dimensions of the golf ball and cup, you need to read my golf ball size guide

The old rule regarding the flagstick was that if the golfer hits the flag while playing, a 2-stroke penalty was observed. Starting from 2019, a new rule has come into force regarding the flag. The golfer now has the option to leave the pin in the hole, or remove the pin.

If the golfer hits the pin with the ball, no penalties will be enforced. It’s believed that this change will make it easier for the players to hole the ball. The rule was mainly changed to speed up the games. Not having to remove the pins from the holes will make the game move faster.

I personally feel like this change has been an improvement. As the sport of golf has been declining in television viewership and sales of golf clubs are in decline, any change to make the game easier is welcome in my book.

Keep in mind, there are a few important rules with respect to the pin:

Aside from the official rules, there are some unofficial rules that you should follow to keep the peace between all players.

Aside from the official rules to be followed, there are some unofficial rules to remember when it comes to the golf flag. These rules are considered good etiquette and every golfer should follow them during a game.

Who Tends to the Golf Flag Stick?

Any player who is currently not playing can remove the flagstick. Tending to the flag generally does not require any special person or credentials.

Even if a flagstick is found on the ground and seems to be in the way of an incoming ball, a player can move it without the fear of incurring any penalty shots. In short, anybody who is on the tee has a right to tend to the pin.

It’s essential to ensure that the right etiquette is being followed while tending to the flags so that no ill will or unnecessary penalties are given.

What Happens If You Hit the Pin in Golf?

Earlier, the rulebook mentioned that hitting the flagstick would give the golfer a penalty of 2 strokes. Recently this rule has been modified. The new rule is part of Rule 13.2a(2) of the official rulebook. The document says that if the ball hits the pin, the flag can be removed without incurring any penalty.

The flag can be removed even after the ball has been played. This new rule has removed some of the delays in the game and the game is expected to speed up a bit more.

Golf Ball Is Stuck Between The Pin and Cusp

This is an interesting situation and a case that happens rarely in the game of golf, but there are some official rules regarding when a ball is stuck below the pin and cusp. When this occurs, your ball is considered as being holed.

If the ball is trapped above the cusp, you have the choice of removing the flag. When you remove the flag, if the ball falls into the hole, then it’s considered as being holed.

If the ball is not holed, then the player must place the ball on the lip of the hole and continue the game. Remember that this will not incur any penalty for the player.

Can you Leave the Flagstick in while Putting?

Until 2018, if the golfer hits the flag while playing the game, a penalty of 2 shots was served. In January 2019, the golf association had come up with some significant changes to the rules. One of these rules was about the flagstick. The golfer can now choose to leave the flag in the hole, and no penalty will be observed even if the flag is hit.

This move was aimed at improving the speed of the game. The golfer will be able to move through the holes at a faster pace.

It’s expected that it will become easier for the players to hole their balls with the flagstick placed inside. There is a high chance of the ball hitting the flag and falling into the hole due to the impact.

Golf is a game where the rules and regulations play a very important role. Every player has to abide by the rules given by USGA. The pocket handbook has details regarding all the rules to be followed.

The Pin is the colloquial name given to the flagstick. The pin helps in identifying and marking the hole location for the players.

There are some rules in place for the flagsticks as well. The player has the option of leaving the flag unattended or asking someone to pull the flag out before hitting the ball. Most players consider removing the penalty for hitting the flag pole as a good change to the rules.

However there are some players who also disagree on this change. I think the controversy surrounding this new rule will still continue for some time.

The good news is if you’re hitting many pin high shots, this change won’t affect you, as your ball is nowhere near the flag!

In this case, you should read my other article called How to Regain Your Golf Swing