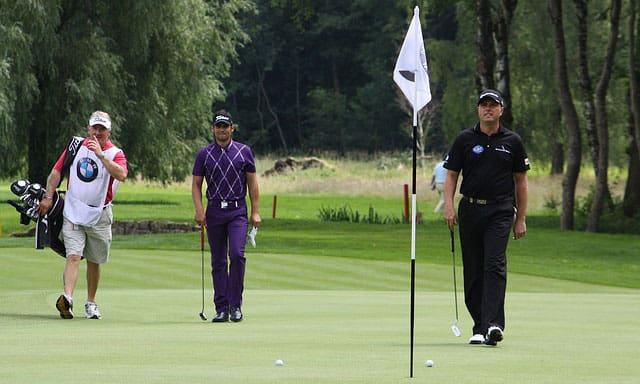 A forecaddie is a person who is positioned near the hole on a golf course whos job is to track the balls location, and the shots a golfer takes. A forecaddie is different to a caddie, who instead has the task of carrying the clubs for the golfer.

While playing golf have you ever wondered who tracks the ball hit by the golfers? Forecaddies are stationed near the hole who have the job of tracking the balls golfers hit.

A caddie on the other hand is a person who carries around the golfer’s clubs from hole to hole, as well as their golf bag. Forecaddies are entirely different from caddies as they do not go behind a golfer but are instead positioned at the holes.

It’s usually hard to even spot a forecaddie on a course. Caddies, on the other hand, assist the golfers and help them make the right choices about the type of club or driver to use for a particular shot.

Forecaddies do not have any interaction with the golfers. They are used mainly in golf tournaments where it’s necessary to track the movements of the ball. Unlike caddies, forecaddies have to only mind the holes. They will have a particular hole assigned to them to mind. Recreational golf games will rarely have forecaddies though.

The forecaddies do not have any influence over the game. They will be used to indicate the position of the ball during a game. They will act as an outside entity in a match.

One of the rules of the USGA dictates that if a ball is moved accidentally by a forecaddie, the player will not incur a penalty. The ball will be replaced and the game will continue as usual. This rule applies when the ball is stationary.

So what happens when the ball is moving and the forecaddie deflects or obstructs it unintentionally? The golfer can continue the game as usual. No penalty strokes will be accumulated. The forecaddie will keep track of the balls used in the game and thus let the game progress at a fast pace.

Forecaddie Vs Caddie – What is the Difference?

In a golf course, during a match, you will be able to find both a caddie and a forecaddie. It is very easy to confuse the work done by both of them. As a matter of fact, the work done by them is entirely different.

The difference between a forecaddie and caddie is that they forecaddie has the job of tracking the shots a golfer takes. A caddie on the other hand, has the task of carrying a golfers clubs along the course. A caddie will also provide suggestions to the golfer on how to take a particular shot.

Remember each type of caddie has an entirely different set of job descriptions. Do you want to know what the basic differences are between the two of them? I will explain it to you.

The Duties of a Forecaddie

Now that you know the difference between a caddie and a forecaddie, you may be wondering about the exact nature of the duties of a forecaddie

Other duties of a forecaddie include:

How Much Should You Tip a Forecaddie?

It’s often very confusing when the time comes to tip a forecaddie. You may worry whether you’re tipping too low or too high. Since there is no fixed rule as to how much you should tip, it may become a stressful task to decide on the right amount.

The recommended amount to tip a forecaddie is $20 to $25 per player.

Some clubs do have a strict no tipping policy which makes things less awkward. The club fees cover the tipping and other service charges. You will need to find out if your club has such a policy.

Keep in mind that tipping is a personal choice and one that shouldn’t break your budget. Golf is an expensive sport as it is, so I wouldn’t go overboard in the tipping. However forecaddies do rely on tips to survive, so be generous when you can.

One of the main factors to remember while tipping forecaddies is that they are akin to waiters in a restaurant. These tips are necessary for them to be able to meet their expenses. So, it’s okay to be generous with the tips.

You can gauge the amount of work done and the quality of work done by these people before tipping them. You can try asking a caddie or a forecaddie about the ideal tip amount of what they expect. This is not really recommended because they will then be put in an awkward situation. You can always ask the pros at the club about the ideal tip amounts given to the various staff.

In general, you can tip a forecaddie $20 to $25 per player. This seems to be an acceptable amount which is not too low or too high. You can always add an extra $10 or $20 to the total tip if you are feeling generous.

When a group of people play golf, it’s easy to think that the task of tipping will be taken care of by another person. When everyone thinks along these lines, tips are few and far between. I recommend to pool in the tips at every point, as this ensures that everyone tips fair and equally.

The Hand Signals of a Forecaddie

Hand signals are an important component of any game. The forecaddie will generally represent some important actions using the sign language. Hence it’s important understand these signals. The following are the most common hand signals used by a forecaddie during a match.

Stop – when the forecaddie shows both the hands with the palms facing outwards it signifies that you must stop playing. You should not play another shot until further instructions. Ball in tall grass- the official will join both his hands towards his left side indicating the ball has been caught in tall grass.

Safe – when the official moves both the hands from side to side in front of him it means that the ball is safe.

Penalty area – when the forecaddie moves his or hers right hand in a downward direction. This action is done towards his right side. This signifies that the ball is in a penalty area. The golfer might encounter a penalty strike for this.

Out of bounds – When the official moves his hands from above his head to his right side, it indicates that the ball has gone out of bounds.

Play away – The official will rotate his right hand in the counterclockwise direction and point with his left hand towards the left side. This hand signal indicates that the fairway is clear.

Read More: How Much Do Golf Caddies Earn?