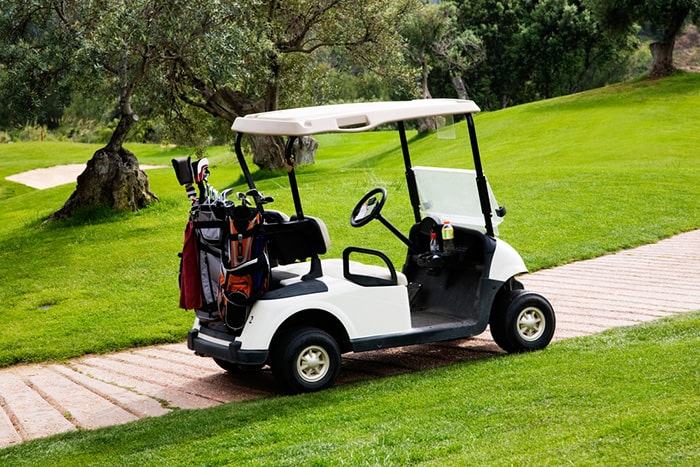 Why is my Golf Cart Flooding Out?

A golf cart may flood if the needle is not shutting off the fuel supply. If the needle on your golf cart won’t shut off, this causes the gas to overflow and oil to leak out.

My advice would be to pull the carburetor and clean it thoroughly and then check out whether the needle is shutting off properly. You may need to blow slowly to put pressure on the inlet and by moving the float.

Causes of a Golf Cart Flooding

Golf Cart Flooding can be caused by:

Dirt accumulation in the fuel has been seen to be one of the most frequent causes of flooding in the golf cart. This is because the valve seat may not have sealed correctly in order to shut off the fuel.

Dirt inside your EZGO fuel can cause the the valve to malfunction, resulting in flooding.

Flooding can occur when the fuel level is too high, or jets are too loose. I found that this happens when choke opens only partially or that fuel is of poor quality. Flooding may occur when your air filter is dirty.

A dirty carburetor is the second most common cause of golf cart flooding. In my experience, a contaminated fuel tank can also cause leaking problems.

Dirty fuel or a bad fuel filter and generally poor quality of fuel can create problems of flooding.

Power Loss Due to No Fuel

Power loos can lead to flooding when there is no fuel flowing properly through a faulty fuel pump. The dirty carburetor can aggravate it further or if the fuel tank or hoses are contaminated. While a EZGO carburetor intake pipe costs $17.95, you may get other accessories around the same price on Amazon.

Power Loss Due to No Air

When air is not regulated, and the system has leaks, then flooding can take place. Even when the air becomes dirty in the filter or there is air blocked inlet, and throttle linkage has problems, then flooding may occur. New air filter (depending upon size) costs $14 and above.

Sometimes, the float bowl may be the culprit causing flooding. The incorrect position of the float bowl is bound to create a problem sooner or later. A blocked master jet or master jet air passage can do so too.

How to Fix a EZGO that Floods Out?

Fixing golf cart flooding is easy with DIY tools like:

You may find enough dirt in the fuel that leaks due to the valve not closing properly. You need to place the valve suitably or install fuel filters in order to keep the fuel clean.

If the problem is with the carburetor, then the float valve and seat must be cleaned.

If there is a great deal of dirt inside, then I suggest that you flush out the entire fuel and pour in some clean fuel.

If you find the valve not working properly, then you may need to replace it with new one. It doesn’t cost much as an All 4 cycle Valve Stem Seat for EZGO gas would cost $ 6.95 on Amazon.

In order to avoid carburetor flooding, you need to spray on the whole body inside as well as outside with a cleaner. For this, you may be assisted by a tubular nozzle of the spray to clean all small and intricate parts. You need to brush clean dirt from carburetor and then dry it with a dry cloth. Purchasing a new carburetor gasket will cost $3.40.

You may need to take care of the overall fuel system if the flooding doesn’t stop. You can try adding some new fuel to see if that fixes the issue.

If adding clean fuel doesn’t fix the issue, the wrong fuel level in the float bowl or a worn out float pin may be the problem. In such a case, you need to adjust the float bowl and replace the float pin. If there is damage to the bowl gasket, then your best remedy would be to replace it with a new one.

5. Power Loss Due to No Fuel

6. Power Loss Due to No Air

You may find a dirty air filter, and I suggest that if it is really dirty, then replace it with a new one rather than cleaning it. You may, however, make adjustments of throttle linkage and see whether it stops flooding.

Using old EZGO carts may give you trouble. I have an old 96 EZGO TXT that gave trouble by flooding without warning. So, I tried to adjust the float, and there was slight improvement yet not enough.

The next thing I did was to drop the front engine cradle a few inches. This improved it somewhat, yet when I also tried putting a T into the fuel line before the carburetor, it performed flawlessly with no more flooding.

For any EZGO 83 to 96 models, this is usually seen and mainly arises due to wear and tear of parts like float letting in lots of fuel or worn out needle or sealing is not proper in that area. It is better to use a new plug and change some parts like the float bowl as the latter starts from $15 upwards.

1983 EZGO flooding may occur due to fuel up to carburetor with a plug too wet. This happens with most old engines. Now, in such situations, check out your compression, and you will probably find a damaged crank seal.

Then you ought to spray or pour some starting fluid on the crank seal so that it fires when you start. But this may be temporary, and so it is better if you scrape off carbon between needle and seal and have a new gasket to give it sustainable performance.

If you still care for 1989 EZGO then you may take some time to see whether the pump is working all right and so also whether there is flooding on the carburetor. In most cases, you would find 1989 EZGO back to performance with a new needle and seat for the carb.

1996 EZGO is also an old model, and wear and tear may create problems of flooding too in this case. Sometimes, an issue may arise in one or two locations, and therefore, you need to locate them. If you sprayed some starting fluid and the problem persists, you may need to replace your carb.

But before that, you may test it with putting a T in the fuel line that is just before the carb. After ensuring that the line runs off to the back of your tank, you may start again.

Just as in the case of other models, 1997 EZGO flooding has the same problem resulting in flooding. You need to clean the carb and look for replacing the safety valve, the pin, and even buying a new gasket to get over the problem.

However, there are not many of these issues with 1997 EZGO golf cart, but be sure to check the filter on the carb.

You must have seen 1996 EZGO and 1997 EZGO golf cart also having problems. The main reason for this is that most engine age faster than I and you would realize. You may, therefore, try replacing it with a slightly newer model, if not new.

This would give you some respite till such time your 2001 EZGO also starts to behave with several issues. Changing a lot of parts or doing major work on an old EZGO may be expensive in the long run.