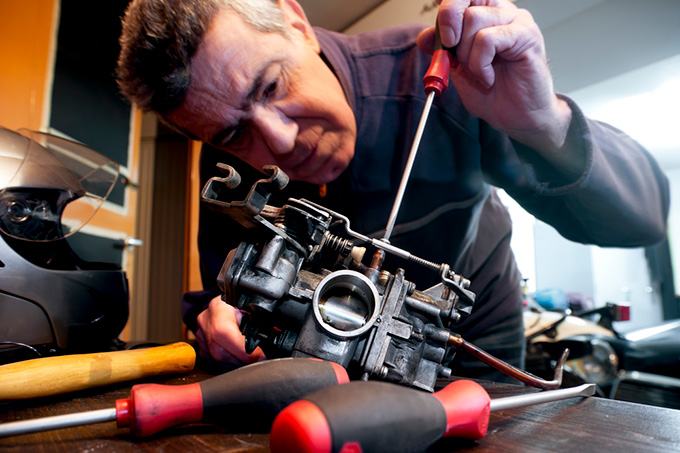 Why is my Club Car flooding out?

Your Club Car may be flooding out because of the following reasons:

Sealing problem: If the carburetor float seat and needle aren’t sealing properly, the free flow of fuel is prevented and the carburetor gets flooded. When they are sealed in place, the flooding will stop.

Damaged fuel pump lines: The fuel pump lines tend to get damaged because of poor quality fuel or the ethanol in the fuel that corrodes the lines. Replacement is often more effective than a repair. Also, ensure that you use good quality fuel.

Clogged hose: The plastic vent hose connected to the bottom of the carburetor sometimes becomes clogged and oily. Remove the hose, clean it thoroughly, and fix it back in position.

Causes of a golf cart flooding

Some of the other major reasons for this problem are given below.

How to fix a Club Car that floods out

The method to fix the carburetor of a Club Car that floods out may vary a little from one cart to another depending on the model. It can be done using some basic tools.

The carburetor of a Club Car DS may flood due to the following reasons:

Dirt accumulation: With extensive usage, the carburetor tends to become dirty. As a result, the float or needle gets stuck in the dirt. You’ll need to clean the carburetor well so that the float and needle get released and allow free flow of fuel.

Crack in the float: The float may develop a crack or hole and get filled with gas. As a result, it will not float but will be pushed down. Changing the complete float setup is a good idea.

Corroded fuel lines: This is often due to bad quality fuel or ethanol. As a result, the pump exerts too much pressure that overcomes the needle valve of the carburetor. When the fuel pump is replaced and good quality fuel is used, the flooding is arrested.

A 1993 gas Club Car may flood out as a result of the following.

Spark plug problem: The spark plug may not be of the correct type. It could also be that the plug is getting overheated.

Debris in float and float bowl: If there is debris in these parts, the needle will get stuck and the fuel flow will be unregulated. Cleaning the debris will allow the needle to move freely and stop the flooding.

The flooding in a 1994 gas Club Car is often due to the following reasons:

Burnt spark plug: A completely black spark plug is an indication that it’s burnt and has to be replaced. Ensure that you get the gap size right.

Dirty inlet valve: A clogged inlet valve can cause flooding. The problem stops when the valve is cleaned.

Improper float position: Sometimes, the float may have moved out of position. Put it back in place and check that the needle moves freely. If there is no free movement, remove and clean the carburetor using a carburetor cleaner. Wear safety goggles when you do so.

If you experience flooding in a 1995 gas Club Car, it is likely due to the following reasons:

Damaged fuel pump: The fuel pump often gets damaged when the fuel has high ethanol content that causes corrosion and needs a replacement. Using good quality fuel is recommended.

Clogged overflow tube: Remove the tube and blow through it. Connect the free end to an in-tank fuel filter.

Defective carburetor: If the carburetor is faulty, like in cases where the screw below the bolt that keeps the gas bowl in place doesn’t have threads, replace the carburetor.

A 1996 gas Club Car may flood because of a sticky float, obstructions in intake box or a clogged vent tube.

The most common reasons for flooding in a 2002 Club Car are improper float operation, faulty needle/seat, a soft intake hose, clogged plastic vent hose connected to the carburetor or a damaged air filter.

link to Why Yamaha Golf Cart Motor/Engine is Too Hot (Overheating)
How hot should a Yamaha golf cart motor get? Generally, a temperature of 170ºF is considered reasonably safe for your Yamaha golf cart motor.  If the temperature exceeds 250ºF this indicates a serious problem. In simpler terms, if you can touch and hold your cart motor for 5 secs without burning your fingers then there […]
Continue Reading
link to How to Fix a Jerky Club Car Golf Cart
Why does my Club car golf cart jerk when accelerating? The main reason why a  Club car golf cart jerks when you accelerate it is due to a misaligned Inductive Throttle Sensor or dirty clutch. Causes of jerky Electric golf carts: 1] Water-logging in some of the components of your electric golf cart can result in […]
Continue Reading