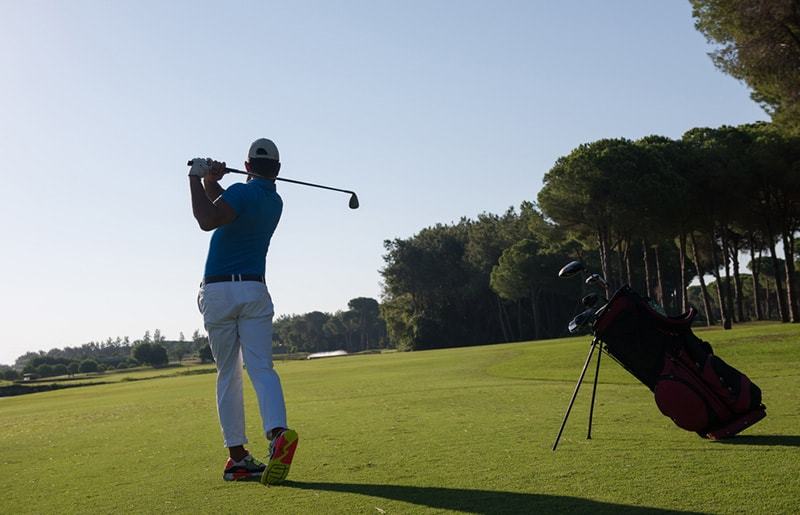 Why is My Golf Swing Speed Slow?

Your golf swing speed may be slow because you tend to swing your golf club hard with tension; instead of just swinging it fast. This makes it challenging to establish good contact with the golf ball.

As a result, the shots rendered are more likely to be unsatisfactory. You’ll also cover a lesser distance than you intend to. Slicing is another reason why you tend to have slow golf swing speed.

As a result of bad timing, you’ll end up casting or releasing the golf club early, almost just when the downswing starts. Because of this, you lose out on the lag that contributes to increasing swing speed.

Improper timing is one of the key reasons for slow golf swing speed or clubhead speed.

If you think you’re speeding up your downswing and backswing but the ball goes to the right, it indicates that you’re speeding your body and not the golf club as required.

If you try to swing your club holding it upside down and experience a whoosh for only part of the swing, the swing speed is not fast enough.

Fixing your grip is one essential aspect of increasing swing speed. The right grip ensures that the golf club will get released correctly through impact.

Poor physical fitness can result in slow golf swing speed due to a lack of flexibility and twisting power. Simple body exercises like swinging a weighted golf club can help improve the strength of your shoulders, chest and hips.

The extra strength will increase your swing speed by combining your downswing and backswing as a single smooth motion. The lower part of your body will start coiling as the golf club continues going backward.

A weighted club also allows you to have a better understanding of how a clubhead feels when it’s released through an impact. As a result, you’ll be able to recognize the exact moment when your clubhead speed is at the highest and gain some additional lag.

A narrow stance at address is undoubtedly a key reason why you experience slow golf swing speed as you’ll not be able to swing your golf club freely resulting in a short swing.

As you widen your stance, you’ll be able to do a relaxed and aggressive longer swing. As a result, the clubhead speed will keep increasing as it passes through the middle of your body and will be at the maximum speed in the air by the time the club hits the ball.

What is Considered a Slow Swing Speed in Golf?

80mph is considered to be a slow swing speed in golf.

A slow swing speed in golf refers to a speed that is slower than the average swing speed.

The best golf players have an average swing speed ranging between 110 and 115mph.

As for LPGA players, a golfer with a swing speed lower than 90mph has a low swing speed and a player with more than 100mph swing speed is considered to have a quick swing speed.

Players who wish to increase the distance that they hit must focus on increasing their average golf speed as the first step. In recent times, golfers have begun to understand the necessity of custom fitting their drivers to improve their overall swing speed in golf.

There is also a direct relationship between a player’s swing speed and handicap, and clubhead speed.

How to Increase Golf Swing Speed

Maintain stability in the position that you set for yourself. You must particularly take care to ensure that your right leg is quite steady and your body is balanced uniformly. Also, make sure that you have a flexed wrist and a full shoulder turn.

The best bet for improving your golf swing speed is to keep yourself free of muscular tension. If you find this impossible, try to reduce it as much as you can. One way to do this is to practice swinging the club on a horizontal surface.

Remember to keep your hands and arms stretched and relaxed. This will help you rotate the golf club and your forearms naturally. As a result, your clubhead speed will also increase.

Use a Wide stance

Keep your stance as wide as possible when you focus on addressing the golf ball. It’s recommended that you lower your head towards the right as you pay attention to the target.  When you do this, you’ll be able to increase your clubhead speed as the club passes through the middle of your body.

Swing using a weighted golf club. Add the extra weight at the clubhead so that it weighs close to three pounds. Grasp the club at various points and swing it for about half a minute.

Focus on a balanced and consistent swing where the club heel is released from the ground because of a smooth turn of the shoulder on the backswing.

Try the exercises mentioned below to increase your golf swing speed.

Some exercises that can help improve your swing speed are medicine ball drills, kettlebell swings, jumps and sled pushes and pulls.

With regular practice and some exercises like the ones mentioned here, achieving a good and desirable swing speed is possible.

Continue Reading
link to Is it Worth Owning a Golf Cart?