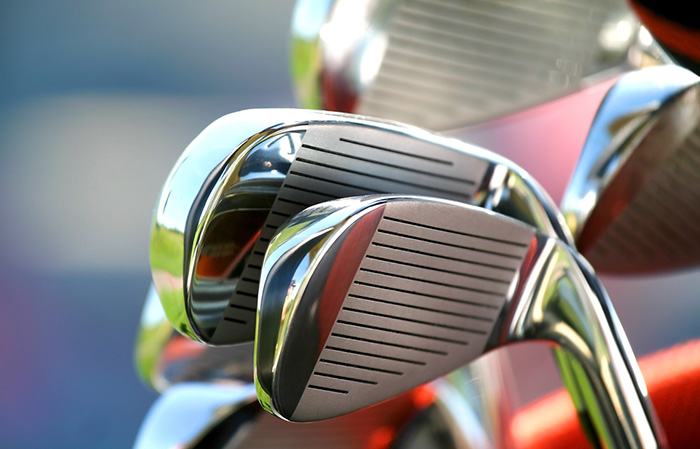 What is the difference between the TaylorMade Sim Max and Sim Max OS Irons?

The main differences between the TaylorMade Sim Max and Max OS irons is the that the Sim Max Iron has a lower loft, and produces less bounce than the Max OS.

Like most other sports, the game of golf has changed a lot in recent times. New technologies have emerged offering more choices to the players as far as golfing equipment is concerned. The modern golfing equipment helps players enhance the level of their game. The golf clubs, especially, are modified to yield better loft and distance traveled by the golf ball.

The irons are always used for distance shots and modern irons have certain new dimensions that make them superior when compared with the earlier ones. The TaylorMade Sim Max and Sim Max OS irons are examples of this.  There are some similarities between these two clubs; however, it is the difference between the two that is being discussed here.

In terms of the physical dimensions, the height of the SIM Max OS is 1mm higher in the toe. The offset is also an additional 1mm in the TaylorMade SIM Max OS irons compared with the SIM Max irons. Similarly, the overall sole width is wider by 3mm. A sole chamfer is provided in the rear which brings down this width to just 1mm.

The slightly lower loft in the case of the SIM Max OS irons will help you hit the ball at longer distance.

The significant differences between the two are in the head of the irons. A lot of aerodynamic technology is put to use to find the exact spots where the face of the club comes in contact with the ball at the time of the shot. The areas that do not come in contact with the golf ball are made thinner placing all the meat at the points of contact.

If you are not familiar with the suffix OS, it stands for ‘oversized’.  A Speed Bridge has been added to the face to make a huge difference to the distance covered by the ball. Most of these irons are quite forgiving, which boosts the confidence of the players. Tests have indicated that the TaylorMade SIM Max OS irons can hit the longest shots.

Is the TaylorMade Sim Max Iron Better Than the Sim Max OS Iron?

You may feel the forgiveness is also more in the SIM Max OS iron. The TaylorMade SIM Max OS is rated as the iron that can hit the longest distance among the contemporary irons that are used in the game. It gives the right trajectory for the ball and the loft is also corrected for achieving these results.

It may be difficult to make a general statement on this. Both have similar attributes and can hit the distance with ease. However, TaylorMade launched the SIM Max and SIM Max OS irons this year at a much lower price point than the TaylorMade P790 iron.

The answer to which is better between the two may also vary with the players. The company says it produces its golf clubs to cater to players with a range of handicaps from +4 to 25.

It must, however, be understood that the distance you can hit a ball will be decided largely by the swing, the exact spot on the clubhead that hits the ball, etc. Golfers who switched to the TaylorMade P790 or the newly launched SIM Max irons from a different golf club could add up to 10-15 yards to their shots.

This is one major difference that technology has brought to these clubs from TaylorMade. These clubs are regularly used by the top PGA pros.

Here’s a comparison of the lofts you get with the TaylorMade SIM Max irons and the TaylorMade P790 irons. The shafts in both cases would be of the stock lengths.

It is clear from the above table that the latest TaylorMade SIM Max and SIM Max OS irons have a slightly lower loft which ensures that your shot is carried a bit longer than that with the corresponding TaylorMade P790 irons.

The variable factors to be considered here are the player’s handicap and swing. These comparisons are for the same player using the two irons for a few shots and the average taken.

Here’s a comparison of the features of the two irons, the TaylorMade SIM Max iron and the M5 iron.

The TaylorMade SIM Max iron certainly appears to have better features than the TaylorMade M5 iron based on this comparison. The distance may be more by just 4 yards here. However, in the hands of a professional player, the ball can go farther than this. These are average figures taken under test conditions.

It is no secret that the modifications to the clubface in the TaylorMade SIM Max irons are superior in every aspect. These include the materials used, the increase in the sole width, and the area for hitting. The forgiveness is also greater, transferring all the advantages to the player.

TaylorMade has no qualms in admitting that they are aiming at those players with reasonable handicaps to go for their latest irons despite the costs, since it helps improve their game.

The TaylorMade M6 iron is positioned as superior to the M5 iron and that is reflected in this comparison of the key features of the club with that of the TaylorMade SIM Max. The difference is marginal.

The difference in the spin by around 300rpm is apparent and the lower number for the TaylorMade SIM Max gives the iron a better result in terms of the trajectory and distance the ball is carried. The loft is also less by less than a degree but can make a difference.

The efficacy of the irons can improve with the user. This is probably the reason why even the senior pros in the circuit prefer these clubs in their armory. It gives them that extra edge they desperately look for in competitive play.

TaylorMade has gone all out to make the clubhead as large as possible, giving the golf player higher forgiveness and a wider area with which to hit the ball. There are a whole lot of changes in the way the shaft, the grip, and the other aspects are designed and constructed. The materials used are far superior to any you have seen before in golf clubs. These new and improved irons are positioned as game improvement irons.

The key features of the irons can be compared as below:

In terms of the design changes, the Speed Bridge on the back of the clubhead is a new feature. The other new inclusion is the ECHO Damping System. This is meant to take care of the vibrations while taking the shots. Besides these, the company points out that the speed pocket technology and the low center of gravity are two technical inputs in the TaylorMade SIM Max and SIM Max OS irons to deliver better shots.

There are competing irons from the same brand, the TaylorMade M5 and M6, the predecessors to the SIM Max irons, and the TaylorMade P790. As it happens with any other product, the preference for one iron over the other will have to be left to the individual player.

Callaway Golf is a competitor to TaylorMade. They also make game improvement irons with superior technology that offers better results while playing. Their latest Mavrik series of irons are said to incorporate cutting-edge Artificial Intelligence or AI technology. Some of the unique aspects of the Callaway Mavrik irons include Tungsten weights to get the center of gravity right.

The Ping G410 iron is another game improvement iron that comes close to what the TaylorMade SIM Max has to offer. The interesting part is that the manufacturer has turned the earlier theories on its head by reducing the overall size of the clubface but still delivering better forgiveness.

On a direct comparison between the Ping G410 iron and the SIM Max iron from TaylorMade, the Ping G410 iron delivered better distances, and players were very comfortable handling the club. The difference in carry was not too high; just 3 yards, but to the golfer, every yard matters.

The Ping G410 irons are made with the COR-Eye technology and the design of the sole and the deep top-rail undercut are combined to deliver the best game improvement results for the average golfer at the club level.