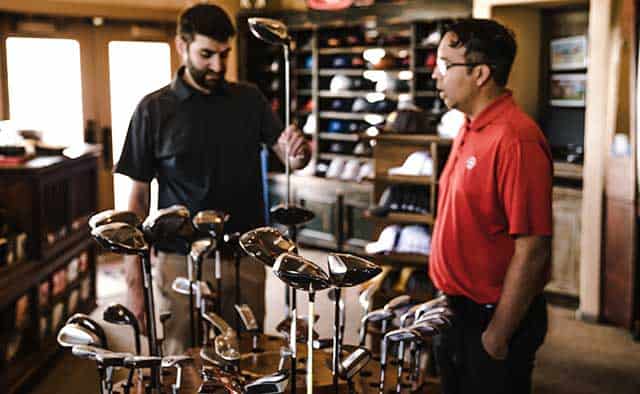 Why Your Golf Club Is Rattling

Why does a golf club rattle? Small particles can come loose from inside the driver head resulting in a rattling sound. If the nosie is instead coming from the shaft, it’s likely pieces of epoxy glue are causing the rattling sound. In most cases rattling won’t negatively affect a golf shot.

I find the rattling noise very irritating during a game of golf.

The rattling sound is usually heard in the driver’s head or inside the shaft.

Some people prefer using some DIY repairs to solve this issue, while others prefer replacing the club or the driver.

Golf club manufacturers usually use rat glue to ensure that the particles that cause the rattling sound get stuck to it.

The glue normally eliminates any noises from occurring. However, sometime the particles will break apart from the glue and start rattling around.

This is the sound you hear in a club. Usually, this happens after a few  years of use, but can happen much sooner.

New Clubs: Although its rate,  brand new clubs could make a rattle, which is a clear manufacturing defect. Use your warranty to replace the golf club if you can. If a warranty is not an option, you can instead try using the DIY tips mentioned in this article.

Old clubs: If you have a really old club (7 years+), I feel you should just replace it with a new club.

How to Fix Rattle in Driver Head

Although the rattling noise can originate from any part of the club, one of the main complaints is from the driver’s head.


Read more: How to use Golf Club Epoxy

How to Fix Rattle in the Driver Shaft

Driver shafts can easily be damaged during a game. If you tend to leave your drivers around, they might have bumped into something hard thereby causing rattles in the shafts.

Usually, the issue is caused by broken pieces of epoxy flying around in the shaft. It can also be caused due to rusting. The rust particles may just fly around the shaft thereby causing the noise.

The simplest solution to fix a rattling sound in your shaft would be to remove the grip from the golf club. After removing the grip, you should be able to remove the particles, therefore stopping the rattling noise.

How to Fix Rattle in the Head Hosel

A small particle could have come loose in the head area of a club or even the hosel area. This could cause an irritating rattling noise to occur every time you use the club.

While the rattle will not cause any difference in the performance factors, it could be irritating to use it due to the noise.

Many golfers enjoy listening to the satisfying sound of club to ball impact. However I’ve found that having a rattling problem tends to spoil the experience.

A club smith is a person who repairs clubs and drivers. He can easily identify and rectify any issues with a golf club or driver.

A club smith could easily heat the epoxy seal to open it and remove the shaft. This way he/she will be able to remove the rattling piece inside. The club will be fixed by heating the epoxy and sealing the shaft.

Ensure that the club smith also cleans the shaft and the hosel with a brush to remove any debris. Cleaning the shaft is essential so that any remaining debris doesn’t cause more rattling issues in the  future.

Excess epoxy is what usually causes this rattle in clubs. It will not affect your shots in any way.

If you wish to remove the rattle in the hosel area, you will have to consult a club smith as there are no DIY techniques to do it without damaging the club.

How Fix Rattle in a Golf Iron

Rattles occurring in golf clubs and drivers are pretty common. Rattles in irons are not very common but they may occur sometimes. If you notice some rattling noise in your golf irons, it is nothing to worry about.

Although, the glue in the shaft might have become a bit loose and move up and down the shaft causing a noise. So, if you hear some rattling noise in the shaft, it could again be due to the epoxy glue.

Some players add additional weight to the iron to get the perfect swing. This additional weight could sometimes cause a rattling noise in the long run. If you have modified the iron by adding in some weight, then maybe that could be the cause of the rattle.

You can easily fix these issues by taking your iron to a club smith. He can remove the extension and fix the parts which are loose or reheat the epoxy glue if that is what is causing the issue. If the issues persist, you should replace the iron with a new one.

How to Fix Rattle in a Golf Wood

If you own a nice golf wood and keep hearing a rattling sound, don’t worry! It could be a simple issue that can be solved easily. You can try opening up the shaft to identify what the issue is.

In most cases, the epoxy glue from the shaft could have come off causing the rattle. In some instances, you might even find a red cap-like thing once you open up the shaft. This red cap is usually a plastic plug and is used to keep the epoxy glue from entering the head region.

If you have a medallion attached to your wood, be careful while using boiling water as it can cause the medallion to loosen up and fall out. In such cases, you might have to run the head under hot water and not immerse it completely.

How to Stop Golf Clubs From Rattling in a Golf Bag

Chatter is one of the common ways in which rattle occurs in golf clubs kept inside the golf bag. When you place some clubs together while taking them to the clubhouse, they often hit against each other. (this is called chatter).

Golf club chatter can easily damage your clubs in the long run. To protect your clubs and prevent them from being damaged, you can use bags to cover the club heads.

You can purchase headcovers for all your irons, woods, and clubs.

Place your covers over your clubs before your next round of golf. This can significantly improve the life of your golf equipment. Rattles and other minor problems will not trouble you again.

There are some good Golf bags from Callaway that have soft padding and extra cushioning inside; giving your clubs the added support they need.

I recommend using iron holders/dividers to organize your irons. Bags are available in different qualities and sizes.  Putters generally come with customized headcovers and do a good job of protecting your putter.

In case you do not want to use bags, a simple solution would be to use towels. You can wrap towels over the clubs before and after each game; preventing your clubs  from scratching against each other.

The only downside of using the towel method is that the towel may not adequately cover all the clubs.

I instead recommend you use clubhead covers or bags for your clubs to protect them from scratches, chatters, and rattling.

Are your golf clubs scratched?
This how you quickly remove scratches from golf clubs