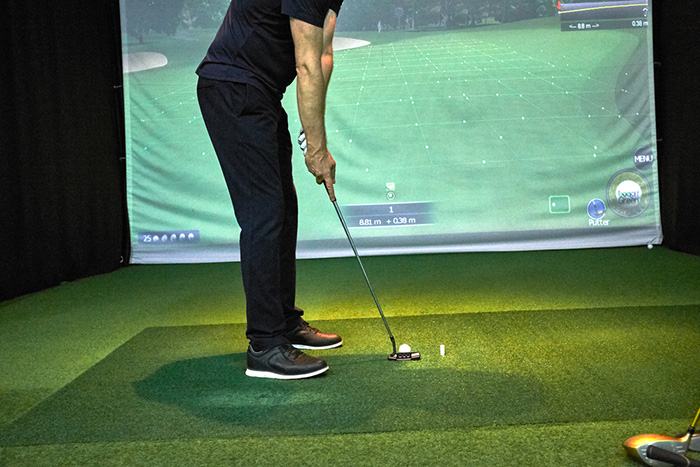 Can you use any projector for a golf simulator?

Yes, you can use any projector for your golf simulator. However, you must consider certain factors for getting the best out of your projector.

This aspect defines the distance from the screen to the projector so that you get the optimum width on the simulator. A short-throw projector works best when space is an issue and prevents shadows from being displayed on the screen.

This feature is represented in terms of lumens. You must ideally choose a projector that displays brightly even in light settings. The clarity of the image on the screen is directly related to the brightness offered by the projector.

This aspect is related to the number of pixels projected on the screen while displaying the image. You must consider getting a projector that supports high resolution so that there is no compromise on the clarity rendered.

A projector often supports a 16:9 or a 4:3 aspect ratio. The ratio can be switched from one to the other with a compromise on the resolution. It’s best to get a projector that has a native aspect ratio that matches the preferred screen size as much as possible.

Does a golf simulator need a short-throw projector?

You can place the golf simulator projector in a position that isn’t exactly behind you. You must also keep it away from your swing area so that you don’t hit it with the golf ball or golf club accidentally. The four preferred options are:

Above the screen and in the middle

When you opt for this position, you must be able to take a full swing with your golf club without hitting the projector. Also, make sure that your shadow doesn’t fall on the image.

Above the screen and off-center

This position involves keeping the projector at a slight inclination. However, you should ensure that the image isn’t distorted and you don’t have to do keystone correction.

This placement is a good option if the room size is small. The advantage of this position is that the projector will be able to do a horizontal key correction. Also, there is no chance of accidentally hitting it with the golf club.

In front and center of the floor

Again, this position is ideal if you have a space problem or want to place the projector in a protective enclosure. It’s also a suitable option if you want to have your projector ahead of you and on the floor.

Should I mount my golf simulator projector on the floor or ceiling?

If you want to adopt the traditional method of mounting the golf simulator projector, you may consider the ceiling mount option. This option is also ideal if floor mounting will not work out for reasons such as lack of space, etc.

On the other hand, if your room has a ceiling height of about 12 feet and you have enough space for a platform of four to five inches, you can place the projector on the floor.

How far does a golf projector screen have to be from the wall?

A golf projector screen should ideally be at a minimum distance of 12 to 16 inches (30.48cm to 40.64cm) from the wall. You can also take some buffer distance into consideration to avoid contact with surrounding objects.

How to mount a golf simulator projector

Mounting a golf simulator projector is a relatively easy process. It’s a good idea to get the following tools and parts ready before starting the mounting process.

The following steps help in mounting a projector to a golf simulator.

How far does a golf simulator projector have to be from an 80-inch screen?

How far does a golf simulator projector have to be from a 120-inch screen?

How far does a golf simulator projector have to be from a 100-inch screen?

How far does a golf simulator projector have to be from a 150-inch screen?

What is the required room height for a golf projector?

The minimum required room height for a golf simulator is 102 inches (259.08 cm). This is ideally the recommended size for tall players as well as players of average size. However, for short players, the ceiling height of your golf simulator can be slightly smaller than the standard height.

What is the recommended golf simulator screen size?

It’s recommended that you use a 180 x 108 (W x H) inches screen so that you can alternate between a standard screen and widescreen based on the projector that you use.

How to hang a golf impact screen from the ceiling?

You can hang a golf impact screen from the ceiling by hanging it in a frame with EMT pipes and using support on all sides. Keep in mind that the distance between the wall towards which you plan to hit and the impact screen should be at least two feet. The enclosure should hang below the ceiling by one foot.

You must equip yourself with the following parts and tools before you go about hanging the golf impact screen.

You can hang the golf impact screen from the ceiling by following these steps given below.

How do I connect my SkyTrak to a projector?

To connect your SkyTrak to a projector, you must first charge your SkyTrak and download the SkyTrak app. This app is compatible with Windows PCs as well as Android and iOS devices.

Once you’re done with these steps, you should register your SkyTrak and pair it with your PC or iPad through a direct Wi-Fi or USB connection or a home network connection.

After completing the above prerequisites, you can connect the SkyTrak to a projector by various methods based on whether you use a PC or an iPad.

This connection is very simple and all you need is an HDMI cable to do this. Connect one end of the HDMI cable to the PC directly and the other end to the projector.

This connection can be done directly using a lightning digital AV adapter and an HDMI cable or through an AirPlay connection.

You will require an iPad or a similar AirPlay capable device or an Apple TV for this type of connection.

Open the ’Control Center‘ on your iPad and select ’AirPlay‘ followed by ’Apple‘. You will find the iPad display mirrored on the projector.

The following list highlights some differences between the BenQ and Optoma golf simulator projectors based on the experiences of some golfers.

The list below gives some key aspects of the Optoma X318ST golf simulator projector that are worth noting.

To sum up, the Optoma X318ST golf simulator projector is an excellent choice for golfers who want to connect a projector to their simulators and improve their game. There are hardly any disadvantages associated with this projector. Moreover, the affordable price is a plus point.

Some key differences noted by experienced golfers, between the Optoma EH200ST and GT1080HDR golf simulator projectors are given below.

The Optoma EH460ST golf simulator projector has quite a few noteworthy aspects that have helped golfers progress with their game.

The ViewSonic M1 portable golf simulator projector has some features worth mentioning that makes it sought after by golfers who want to set up a golf simulation kit to improve their game.