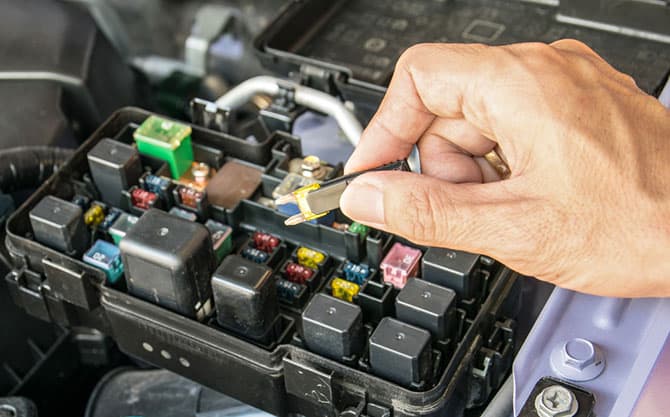 SAFETY DISCLAIMER: DON’T attempt to fix any fuses and/or electrical issues with your golf cart. The information has not been verified for accuracy.

ALWAYS use the services of a electrician/mechanic. The steps in this guide are for educational purposes only, and should NOT be attempted, as serious injury could occur.

Do Golf Carts Have Fuses?

Yes, all golf carts have fuses and breakers. Most controllers like Alltrax come with a fuse because having a fuse on the battery pack offers many advantages.

One major advantage of having the fuse is that it offers protection against fire or a short. This is because a fuse can often deliver a current higher than its rated value before it blows up.

A fuse also helps in getting a warranty for the controller.

Where is the Fuse Box Located on a Golf Cart?

Where is the fuse box located on a golf cart? Most EZ-GO carts will the fuse located in the charging receptacle. The 2008 EZ-GO TXT gas golf carts have inline fuses that are connected to the key switch.

In 1990 Marathon golf carts the fuse panel is situated behind rubber air intake bellows on the inner body on the passenger side where it’s fitted to the carburetor.

In a 1997 Club Car, the fuse is located in the electrical components black box that is present near the battery. On the other hand, in a 2005 Club Car Precedent, the fuse is connected to a blue wire under the golf cart seat.

A golf cart fuse can blow for many reasons such as a faulty relay switch, loose connections or a naked wire.

There are some reasons why your golf cart fuse tends to keep blowing:

How to Fix a Blown Fuse on a Golf Cart

You can follow the steps given below to fix a blown fuse on a golf cart using a new replacement fuse and a pair of fuse pliers.

If the fuse tends to blow repeatedly, the golf cart has a major problem with its electrical system. It’s recommended having a professional inspect your golf cart.

The fuse box in a 2014 Yamaha golf cart is located on the left side of the controller. The wires are tied to the roof drain.

In a G2 electric cart, the fuses are present on the rear inner fender. This is on the front of the driver’s side of the cart. They’re round in shape and made of glass.

The blue fuse block in a Yamaha G29 golf cart is below the cup holder and secured on the shelf. It can be accessed by popping out the cup holder using an Allen wrench.

The 2008 EZ-GO TXT golf cart uses an inline fuse with a small wire going to the key switch. This wire is present at the point where the big wire of the positive battery terminal is connected to the solenoid.

In a 2005 EZ-GO electric golf cart, the fuse block is located below the driver’s seat. The fuse box in a 1990 EZ-GO golf cart is present in the wheel according to the manual.

The fuses in a 1986 CC DS gas engine golf cart is located behind the dash. The fuse box in a 1997 Club Car can be found in the black electrical component box that is near the battery.

In a 2004 Club Car Precedent, the fuses are located in two black plastic fuse holders that come with a molded support hole extension.

On the other hand, the fuse insert in a 2005 Club Car Precedent is present under the seat with a blue wire attached and is fitted to the light wire harness.

The 15-amp fuse in a 2008 Precedent is located on the rear below the controller harness. This can be accessed by removing the plastic cover above it.