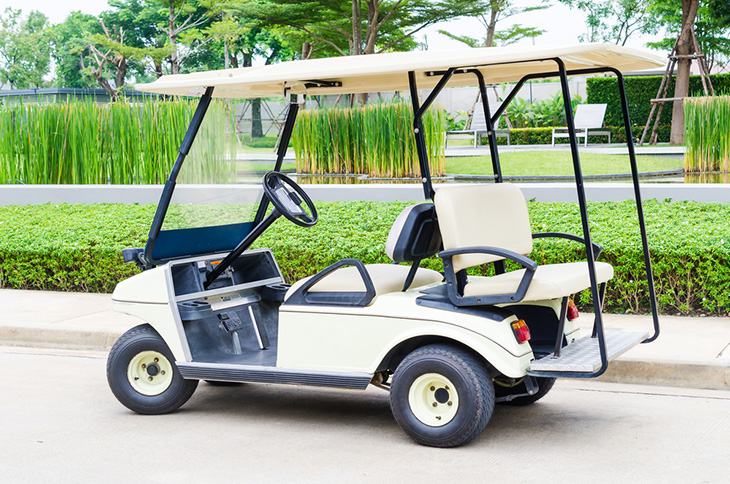 Why an EZGO Clicks but Won’t Move?

A EZGO golf cart can click but not move due to a faulty solenoid, or damage to the wires connecting the ITS coil to the controller.

EZGO golf cart owners often assume that the batteries on their carts are fine and look for other reasons when faced with issues. The problem of the cart’s solenoid clicking but the cart not moving is reported by many. Experts advise that checking the batteries is critical.

The important thing to note is that if your cart has a battery pack rated at 36 V, it must indicate 38.22 V when fully charged. Make sure that this is happening.

Equally critical is to check that the individual batteries of 6V show at least 6.37 volts, when fully charged. If you are satisfied that your cart batteries show these voltages, then you can move on to the other possible reasons for the cart not moving.

Some cart owners may fix a hidden switch that is left in the OFF position to prevent thefts. Check if your cart has one.

Check all the connections to confirm that there are no loose wires or if some cable is hot and not functioning as it should be. Sometimes these actions are enough to solve the issue.

Other parts in the cart that could cause the problem are the controller, the ITS sensor, motor, solenoid, the Rotary F/R switch and bearings. Any of these could be faulty and can cause trouble. The service manual comes in handy if you are to check these parts.

Carts are simple machines. If its powerpack can transmit power to the controller and the controller in turn powers the motor, then the cart should move. If it is not moving, the issue remains within these areas.

Improperly aligned contact studs located on the cam in the F/R switch can be another reason why the cart does not move. The four studs have to be aligned properly.

There are several reasons why your EZGO golf cart won’t move though you can hear the click from the solenoid. Some of the common reasons are as follows:

Sometimes the problem occurs intermittently. That is when it becomes more difficult to diagnose and solve. In most such cases though, the wires and connections may be loose or not properly secured.

Some troubleshooting tips that may be of help are given below.

The problem could sometime be with the pedal box. To fix this, follow these steps:

This way, you will be able to identify if it is a pedal box trouble and can take care of it.

The Forward/Reverse switch is the issue on many occasions. Change the switch and check. There is a way to completely do away with the F/R switch and replace it with SD Reversing Contactor.

Instead of changing the switch you can open it and check the contacts. Sometimes the board could have melted due to heat. You can replace the board with a heavy-duty board.

How to Fix an EZGO TXT that Clicks but Won’t Move?

Sometimes the diagnosis is easy and at times difficult. In one such case, the regular checks were suggested such as checking the solenoid, the controller, the cable connections, the battery voltage, etc. It turned out the controller was not functioning properly and the cart started working normally once the controller was replaced.

You can check the red wire that runs from the solenoid to the accelerator. It may lack continuity and fixing it will make the cart run smoothly.

A better solution here is to do away with the connector and use solder joints or crimp-on butt slices.

Every time this issue is brought up, the standard advice is to check the batteries. Many golf cart owners check them but don’t do it the way it should be done. Here’s a recap of how to check if the batteries in your 1996 EZGO RXV golf cart are in proper shape or not.

Only if you get the uniform reading of 6.37V on each of the batteries can you be certain that the battery pack in your cart is working fine. Many people make the mistake of not charging the batteries to its full capacity the first time before installing them in the cart.

This must be done for 12 to 18 hours. When you charge the batteries daily, allow them to get charged 100%.

A minor thing like over-tightening of a stud can lead to the 1997 EZGO RXV golf cart not moving. The F/R switch has a stud and if you apply more pressure it could get over-tightened and the contact will not touch the switch. Once you adjust this, your golf cart will start moving smoothly.

In a 2009 EZGO RXV golf cart, the controller was found to disable the cart when the charger is plugged in. This is an in-built mechanism of the cart. It is not recommended to bypass this interlock except by mechanics that have experience with RXV carts and their electrical components.

A set of solutions offered for the 2009 EZGO RXV golf carts is given below.

Replacing the RCM unit has produced the desired results in 2010 EZGO RXV golf carts which had the same ‘clicks but won’t move’ problem.

If the reading is 47 V then you can conclude that the drive motor is bad. This applies to the 2010 EZGO RXV model golf carts.

Many users of the latest model golf carts don’t realize that these are more computer-controlled and highly sensitive. You cannot handle them as you would the older models of carts. There are occasions when users have ended up burning out the whole system without knowing what they have done.

You can try replacing the Danaher controllers in the 2012 EZGO RXV golf carts to see if it solves the problem.