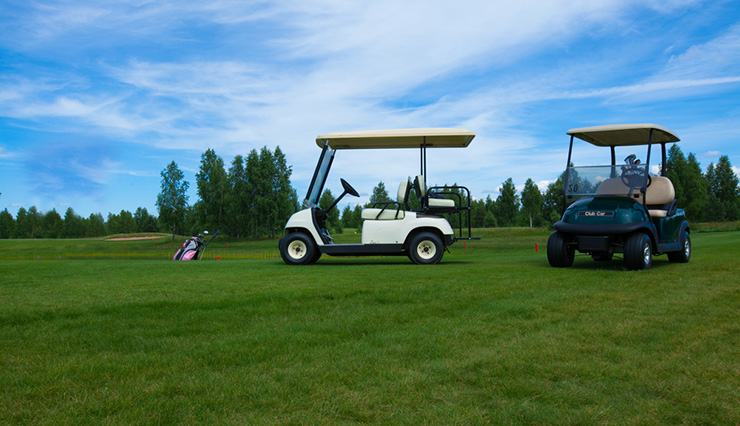 What is the Difference between EZGO RXV and TXT?

The main differences between the EZGO RXV and TXT are that you can customize the RXV a lot more than the TXT.  The RXV also has more horsepowerat 4.4HP, while the TXT only has 3HP.

Some of the differences between the EZGO RXV and TXT golf cart models are as below:

EZGO launched the RXV models in the year 2008. The TXT golf carts date back to 1996 and its production by EZGO continued till 2013. For those not familiar with the acronyms, TXT is the acronym for Textron the company manufacturing these golf carts. RXV stands for Rear Crossview Mirror.

There are many similarities between the two models, EZGO RXV and TXT golf carts, but some variations as well. Only the differences are highlighted here. It must be mentioned here that EZGO constantly make changes to the models each year.

Most of the key technical specifications and components are identified on these golf carts through their year of manufacture.

Which is Better EZGO TXT or RXV?

There are pros and cons to both the TXT and RXV models of EZGO golf carts.

Most golfers prefer the EZGO RXV over the TXT model.

Reasons why EZGO RXV is better than the TXT are:

However, most of these people add a caveat that you should try and settle for an EZGO RXV golf cart that is manufactured after 2010.

The opinion of EZGO golf carts made before 2010 is not very high. EZGO did make several modifications to the cart after 2010 which has resulted in much better golf carts.

The older models can be bought and used after changing some of the key components.

The cons of going in for the RXV model according to the experts on forums are:

Some users have been driving the EZGO TXT golf carts for over 15 years and are quite happy with it. The battery pack is often pointed out as something better in the TXT models. There are usually six batteries of 8 volts each in a 48V EZGO TXT golf cart.

This ensures that the batteries get charged quickly and even if one battery were to fail, it can be replaced. In the EZGO RXV golf carts, the stock configuration is 4 x 12 V batteries.

As far as the cons of the EZGO TXT golf carts are concerned, the main factor is that these are the older versions of the vehicles from the manufacturer and it is sometimes difficult to source the parts needed for repairs. There is also the issue of the cart not running smoothly while climbing slopes. This is important in most golf courses.

What Does EZGO RXV Mean?

This is a unique vehicle safety system, a proprietary technology from EZGO and the company chose to name the model as EZGO RXV. The RXV model was first launched in 2008. The company makes a range of golf carts in this model with options to run using gas or electricity. The end use of the vehicles of these variants also varies.

They are sold to individuals, golf clubs as part of their fleets, and to governments.

What does EZGO TXT mean?

The EZGO TXT golf carts belong to the older generation and were made between 1996 and 2013. The letters TXT represent the parent company’s name Textron. These carts are still being used by many golfers and others, if you were to go by the posts on the various forums.

This old vehicle has its charm and the used models are sold and bought all over the US even now. Some of the parts can be sourced on sites like eBay or from specialized parts dealers.

How Fast does a EZGO RXV Go?

The average speed of the EZGO RXV golf cart, as indicated by the manufacturer for the typical 48V Electric model is 8-15 MPH or 13-24 KMPH.

In practice, however, users will tell you that they are able to get around 12-13 MPH or around 19 KMPH. Some users manage to lift the cart and replace the stock tires with larger ones and achieve better speeds than those stated here.

How Fast does a EZGO TXT Go?

The reason for this could be that the gas variants weigh less. The batteries are heavy and can drag the carts down. Some users do modifications and gain on these speeds.

In the case of the EZGO TXT golf carts, a comparable model can do a top speed of around 25 MPH but the manufacturer would set it to 19.5-20 MPH because of the regulations.

The EZGO TXT Valor is the latest golf cart from Textron belonging to its 2020 edition. It is a gas-powered vehicle. It features a continuously variable transmission (CVT), and a rear axle ratio of 11.47:1. It has one 12V battery.

The Valor’s engine generates 13.5 horsepower. The rest of the specifications are not very different from the regular TXT golf carts from the EZGO stable.

The comparable EZGO RXV EX1 Gas golf cart develops a horsepower of only 11.5. The remaining specifications look identical, with the rear axle ratio of 11.47:1, and the drive train being the same CVT.

Other factors like design, shape, and looks are all the same and if you park them side by side you may not be able to tell them apart easily.

The other difference is in the location of the F & R switch. The EZGO PDS has it on the dashboard. In the Series or Fleet TXT, the F & R switch is located near the driver’s leg when seated.

The other key difference between the two golf carts is in the electrical system. There is a controller in the EZGO PDS golf carts. This can be used to set the various stages for the regen braking system. This is not present in the TXT Series golf carts.

In terms of speed, the EZGO PDS carts can reach speeds of 19 MPH while the EZGO Series golf carts are calibrated to run at only 12-14 MPH.

In terms of the other differences, the S4 has lights and a 13.5 HP Kawasaki engine. The TXT on the other hand can only rev up 7 or 9 HP.  There is a lifted heavier suspension and a seat kit in the EZGO S4 whereas, in the TXT Gas models, there’s a standard suspension and no lights or no seat kit.

You can try to find out from the dealer nearest to you if modifications can be made in the golf cart model you are planning to buy and settle for the one that suits you. The cost of the additions and alterations may vary.